* In case of any delay in receiving the OTP, you may verify it later. Please proceed without verification.

Enter your City name or Pincode

Jasidih is a city and a well-known hill station that is situated in the Deoghar district or the Jharkhand State in India. Though a small city, it has everything to captivate newly arrived tourists. Beautiful scenic beauty along with traditional culture and tourist attraction makes it a must visit town of Jharkhand. One can reach this place through different parts of India. The interesting thing about this city is that, it is connected to Bihar and Jharkhand state. 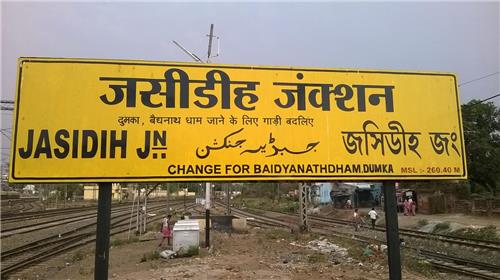 This Hill Station of Jasidih has a great panoramic view and lies between the latitude of 24.52° to the North side, and longitude of about 86.65° to the East. The region even has an average elevation of 260 metres long (i.e, approximately 853 feet), and is surrounded by many villages like Kalipur, Sagdah, etc.

Transportation in Jasidih can be done with ease, as there are different means like roadways, airways and railways. Jasidih Junction lies on the main line of Howrah to Delhi route (Indian railway). And since, there are direct buses and trains to Howrah, you can reach this city first, and from here, you can catch some private vehicles or buses to reach Jasidih.

Culture and Festivals in Jasidih

Jasidih has a unique tribal culture and is surrounded by tourists. And the festivals in Jasidih that are commonly celebrated in Jasidih are Vijayadashami, Ekadashi (Fasting), Christmas, Holi, and some other festivals as well. Overall, the festivals are inherited from the Jharkhand State as well as some other parts of India.

Utilities and Services in Jasidih

The place of Jasidih is quite small with nothing to shop more, but there are many services provides as well like bank services, medicinal services, tours and travels services, professional services, consultancy services, post office services, police stations, and many more. So, you can easily find the services that you wish to get at Jasidih.

You can find all the food of Jharkhand here at Jasidih, as this city is the part of Deoghar district of the State of Jharkhand. Also, you will find the very common north Indian and South Indian dishes to help the tourists from all over India feel home-like environment in the city of Jasidih. Thus, you can have your own traditional food here, as both veg and non-veg food is consumed in the city. There are no hotels located inside Jasidih, but you can find hotels on the way to Deoghar which is very near from this town.

This city of Jasidih is a small place, which has few medicinal shops, and liquor shops along with few mobile shops are found in the local market. However, tourists can buy anything like garments, footwear, electronic products and some other essentials such as gift items and home decorative products, etc. on the way to Jasidih or Jasidih road, as there are only few stores available in the local market of Jasidih.

This city of Jasidih is famed tourist destination that has been attracting the people through its interesting sightseeing places, historical places and much more. You can visit this place any time during monsoon, winters or summer season, as all seasons are favorable to visit this beautiful region. One can move to the nearby villages are namely the Sagdaha, Tabhaghat, Deopura, Lodhradih, Kusmaha, Kalipur, and Dharwadih. Baba Baidyanath Dham temple is an important attraction near this town of Jharkhand.

Comments / Discussion Board - About Jasidih